Pollution from burning coal is the single biggest driver of global warming – threatening life, health and the environment worldwide. 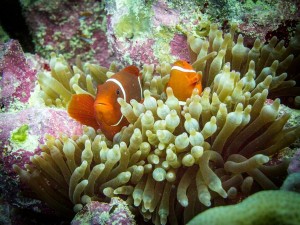 The Barrier Reef is a world heritage listed, natural inspiration and the world’s biggest living ecosystem.

Scientists state that the Great Barrier Reef’s ecosystem is threatened by climate change, waste water, fishing and coastal developments including the use of nearby ports to export coal.

Coal dust released from Adani’s Queensland existing coal port after the Cyclone Debbie in April 2017 has already caused massive contamination of fragile wetlands in the Caley Valley. This demonstrates clearly the environmental stress a new coal mine would cause in such a fragile and at the same time precious natural environment.

People are actually dying from pollution. 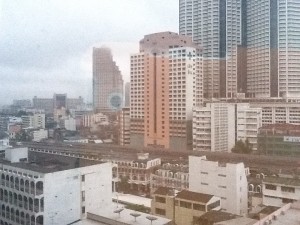 In addition to the direct environmental impacts, the health impact of burning coal is well documented.

It is estimated pollution causes 3 million deaths each year worldwide – predominantly heart and lung diseases. Most of these deaths occur in developing countries with China and India at the top of the list. 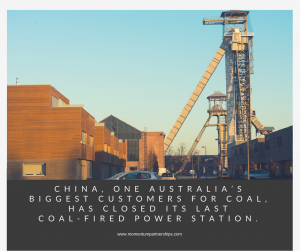 Renewable energy, not coal, is the future.

The Indian government is determined to move away from coal as fast as possible, the Indian Minister for Energy said in 2016 that India intended to import no more coal within 2-3 years!

China and India are still two of Australia’s biggest customers for coal and both countries together with the rest of the world are moving away from its use rapidly.

Furthermore, there is now a great deal of information indicating that economically Adani’s proposal does not add up.  The Institute For Energy Economics and Financial Analysis recently concluded:

“Adani Enterprises has a weak balance sheet and excessive debt. With a market capitalization of just US$1.9 billion, net debt of US$2.5 billion, and a wide range of expansion projects across multiple industry sectors, Adani Enterprises is not in a strong financial position. Without a major new equity raising for the project, Adani may attempt to finance the Carmichael mine entirely by debt, a high-risk option for shareholders and lenders alike. A further debt raising would seriously over-stretch the company’s already leveraged balance sheet.” http://ieefa.org/ieefa-update-increasingly-cursed-australian-coal-project/

What is so special about the Adani Carmichael Coal Mine? 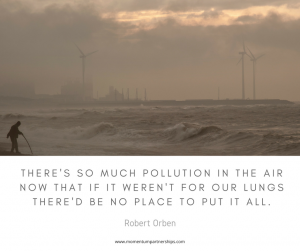 The Adani Carmichael Coal Mine would be the biggest coal mine in Australia.

The Adani Carmichael Coal Mine, if established, would have a lifespan of 60 years.

The Adani Carmichael Coal Mine would mine the dirtiest type of coal in a remote, environmentally beautiful and fragile location, including the Great Barrier Reef, worthy and in dire need of protection rather than the destruction that comes with mining.

Westpac, the country’s second-largest bank, released a new climate policy on Friday, saying it would limit lending for new thermal coal projects to “only existing coal producing basins”. The coal mined must also have energy content “in at least the top 15% globally”, meaning at least 6,300 kilocalories per kg, according to the Westpac policy. Adani’s Carmichael mine would be the first in the Galilee basin and the coal would have only 4,950 kilocalories per kg, the miner told the Queensland land court in 2014. The Guardian, Australian Edition, 28/04/2017.

The Adani Carmichael Mine has been granted an unlimited water licence by the Queensland Government for 60 years at a time when farmers and many others believe such large-scale depletion of public water resources is unsustainable.

Water is one of the most precious and problematic resources in Australia and worldwide.

Opposition to the Adani Carmichael Coal Mine

For all of the above reasons there has been an avalanche of opposition against the Carmichael Coal Mine expressed through public demonstrations, open and private letters to the Chairman of Adani, financial institutions, would be suppliers, politicians and others involved with the decision making process.

In addition to representatives of organisations, a significant number of private individuals have made their opposition known by showing up, donating to fighting funds, writing letters at a scale rarely seen before including war veterans and cricketers.  High profile people from all walks of life added their voice to campaigns organised by environmental protection organisations including the Australian Conservation Foundation, GetUp and others.

Ms Vaishali Patil, an Indian activist with direct experience of Adani’s environmental, human rights, bribery and corruption record in her own country, has spoken out publicly and warned the Australian public about the many negative impacts of this project. Read her considered view  here: Exposing Adani Vaishali Patil

The Role of the Australian Government. 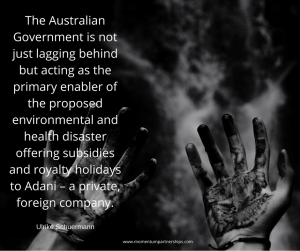 When it comes to business and human rights, corporate and social responsibility  – Governments are lagging behind around the world.  Read more here.

In this particular case, it is worse. The Australian Government is not just lagging behind but acting as the primary enabler of the proposed environmental and health disaster offering subsidies and royalty holidays to Adani – a private, foreign company.

Governments should make decisions in the interest of the future.

It is hard to understand why the Australian Government is taking this position against the advice of scientists, wishes of its voters and taxpayers and despite economists and financial institutions judging the mine as a bad investment.

While the Federal Opposition has distanced itself from the mine of late due to increasing pressure – only in regard to paying Government subsidies – the current Labour Premier of Queensland, Annastacia Palaszczuk has been courting Adani arguing short-sighted and short-lived economic advantages for Queensland all the while ignoring the realities described above.

“What we know about this project is that it is vital for regional jobs,” she said.

“For the Queensland Premier and the Prime Minister to suggest that this project helps Australia economically and in the context of employment is just an outright lie.” Geoff Cousins, President, Australian Conservation Foundation.

During the last election campaign, Queensland Labour promised no taxpayer funds would go towards Government subsidies for the rail line linking the Carmichael mine to the port of Abbot Point. Ms Palaszczuk, then the Opposition leader, slammed the Campbell Newman government for offering Adani a subsidy, accusing the LNP of “throwing a bucket of taxpayers’ cash” at the company.

Now the Queensland  Premier together with her Treasurer has even attempted to offer the Adani Carmichael Mine royalty holidays which could cost Queensland up to $1.2bn. The Climate Council this provides further evidence the project did not stack up financially.

“It appears the only possible way this may go forward is with very big subsidies from the Commonwealth and the QLD Government,” the Council’s Professor Will Steffen said.

The intentions to mine coal in the Galilee Basin doesn’t meet the needs of Queensland nor Australia nor the rest of the world. On the contrary.

Conserving and preserving the natural environment meets the needs of everybody, now and in the future.

And that is worth fighting for.

There are many ways to get involved. If you can, organise your own or participate in the many activites or donate :