The failed attempt of voluntary corporate sustainability strategies to save the planet.

Corporate sustainability strategies developed in response to the resource constraints of the 21st century.  These constraints are the result of over population and over consumption and their damaging effect on the health of the earth.

Even the gentle Sir David Attenborough has joined the chorus of people arguing for fewer people in the interest of more biodiversity and a quality environment in his speech People and Planet in March 2011.

We have been trying to persuade companies to engage in voluntary corporate sustainability programmes of all kinds in order to address the obvious negative impacts of the way the ‘developed’ world does business.

However, do we ever stop to consider if it actually makes sense for a particular industry to engage in sustainability programmes or should it rather be a question of planned abandonment of this particular industry/product/ manufacturing process?

Take the issue of water.

The right to clean drinking water is arguably a basic human right for all.

So when a major CEO makes a statement to this effect:

“Companies are bigger than many economies. If we don’t do responsible things, who is going to?” Pepsico’s CEO Indira Nooyi

How is a company’s quest to secure water rights all over the world deemed to be ‘doing responsible things’ when our basic human rights of access to water is in conflict with the water rights sold to the company? This is further complicated by the fact that Pepsi or any other soft drink of that nature, does not offer an alternative to water – we would be unable to survive on it yet it competes with our water supply.

Currently 1.1 billion people are without access to safe drinking water and live in chronic hunger. The UN estimates that by 2025 more than 2/3  of the worlds population will lack access to sufficient clean drinking water.

The United Nations Millennium Development Goals call for halving the proportion of people lacking sustainable access to safe drinking water by 2015.  Meeting this goal would require doubling the US $15 billion a year that the world currently spends on water supply and sanitation.  US $15 billion may sound like a large amount of money but compared to what we are spending on bottled water it pales in comparison.

Drinks companies not only use water in their production cycle but many increasingly also bottle water for profit which amounts to the ‘commodification’ of something that should not be bought or and sold.

According to global financial services firm Morgan Stanley the global water market is estimated to be worth about $316 billion US$ p.a.

Even in countries where tap water is safe to drink the demand for bottled water is increasing and producing unnecessary garbage and consuming vast quantities of energy.

Pepsi-Cola; Coke; Nestle and Suez are some of the companies bottling water for sale and profit. They have been called upon to: 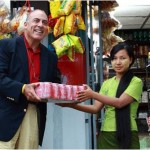 Extraction of large amounts of water for industrial purposes impacts groundwater levels.  For example, communities across India living around Coca-Cola plants are experiencing water shortages – allegedly as a direct result of Coca-Cola’s extraction of water from the common groundwater resource.  Studies have confirmed significant depletion of the ground water tables and contamination of ground water.

And who else but Coca-Cola would make its first delivery to Myanmar in more than 60 years in September 2012 . is this the real contribution to democracy  the country has been waiting for!

Allowing  ‘luxury’  consumer goods like soft drinks to compete with access to safe drinking water and sanitation makes no  sense and is not in our common interest. More and more people are entering the middle classes.

It is high time we have a discussion about what we  actually need to have a good life – in my books Coca-Cola is not on the menu if it means that one person has to go without clean water and sanitation.