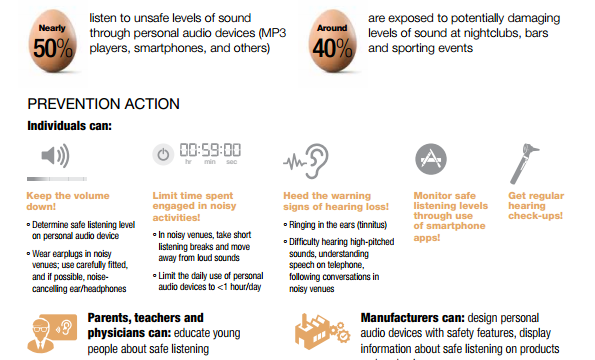 Attention has been focused on the potentially negative effects smartphones can have by way of emissions, privacy intrusion and unsafe driving practices. We haven’t yet shed sufficient light on the impact smartphones, MP3 players and other listening devices can have on our hearing.

1.1 Billion Young People Are at Risk of Hearing Loss

This has led to a situation where,  according to estimates by the World Health Organisation, about 1.1 billion young people worldwide are at risk of hearing loss due to unsafe listening practices.

Due to the prevalence of relatively cheap modern technology we are facing a sharp rise in self-induced hearing loss.  Luckily, however, state of the art remedies – including highly effective and almost invisible hearing aids- are available.

Prevention of Hearing Loss Requires a Change in Attitude

I have to admit that until recently my attitude towards hearing health care was fairly flippant. Only through my work for the Hearing Care Industry Association  have I begun to understand the magnitude of the issue and how it will affect us in the future if we don’t respond appropriately.

Hearing is something most of us take for granted, just like breathing and seeing. Our understanding of good hearing care is limited – unless we are professionally or personally involved with the issue. Most people don’t think much about their hearing until they have an issue with it.

But that is about to change because hearing has made it onto the main agenda, and for good reason. There is a hearing loss epidemic on its way which, to a large extend, is entirely preventable.

Illustrating a Case In Point

Recently a man brought his 3 year old daughter to a meeting I attended. To ensure she  didn’t disturb proceedings, he allowed her to listen to a story on an MP3 player and although I sat at the other end of a large meeting table I could hear what she was listening to through earbuds (also known as inner ear head phones or earphones).  I spontaneously drew attention to the fact that she was listening to the story too loudly, thinking the dad had not noticed and would tell her to turn it off or down. I even mentioned there is a setting for safe listening levels on most of these devices and received a very sharp reaction to mind my own business and that his daughter is old enough to adjust the sound herself according to her choice.  The situation remained with me. It indicated vividly the widespread lack of awareness of the real risks associated with the technology. The girl was definitely too young to know about safe listening levels or to judge the long term consequences of her behaviour and the father was obviously unaware as well. How can this situation be changed?

Estimating the Extend of Hearing Loss

The World Health Organisation (WHO) estimates that:

The WHO proposed several preventative actions to be applied on a personal level:

The WHO also recommends wider action which specific sections of society can undertake and which could translate into a social marketing awareness raising campaign about hearing health and hearing loss.

We need to act urgently. Hearing loss has significant repercussions for those affected as well as for society at large. The most obvious effect is that it is socially isolating and this isolation has other side effects. Hearing impairment also impacts an individual’s ability to find employment.

Interestingly, the current production of hearing aids meets less than 10% of the global need. Hence, while we educate everybody at all levels about the need for hearing health and preventative measures, we also need to facilitate the production of sufficient hearing aids and deal with the issue of access and affordability.

Hearing Awareness Week will be held in Australia from 23 to 29 August, a good time to debate the future of ear and hearing care.  And just remember, we will also collectively pick up the bill for the hearing damage and loss of productivity resulting from hearing loss.

References and further reading about hearing health and hearing loss: