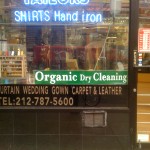 Organic produce are big business these days as evidenced by the large supermarkets getting in on the party. Three decades ago it was difficult to find organic produce and only the determined persisted as it didn’t only often require extra travel time but was also quite expensive. Prices have come down significantly due to larger scale production to meet the increasing demand but it is still a pricey luxury of the well to-do rather than an all around affordable way of shopping for the weekly groceries. This is part of the reason why this industry has been resilient during recessions – people with above average incomes (in Sydney that would be way above $150,000…) are not as affected by recessions and therefore this market has grown during hard times.

Organic Monitor, a research company based in the UK, estimates that the global market for organic food and drink products in 2009 was $US55 billion – more than double than in 2000.

There are more and more co-ops which make access to organic food a lot more affordable for everybody.  We are based in Sydney and have been shopping at abundant organics:  click here to check out abundant organics.